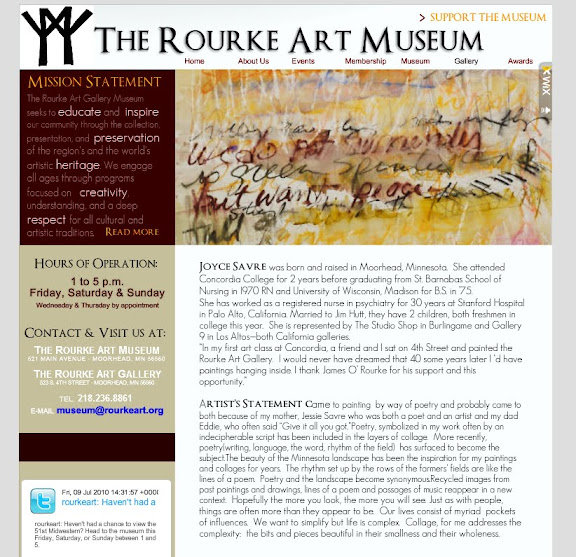 This solo show at Rourke Art Gallery is somewhat of a dream come true for painter Joyce Savre. Having hailed from Moorhead, Minnesota, Joyce explains, "In my first art class at Concordia, a friend and I sat on 4th Street and painted the Rourke Art Gallery. I would never have dreamed that some 40 years later I'd have the paintings hanging inside."
Posted by Jamie Welsh Watson at 1:12 PM No comments:

Getting New Cards is So Much Fun 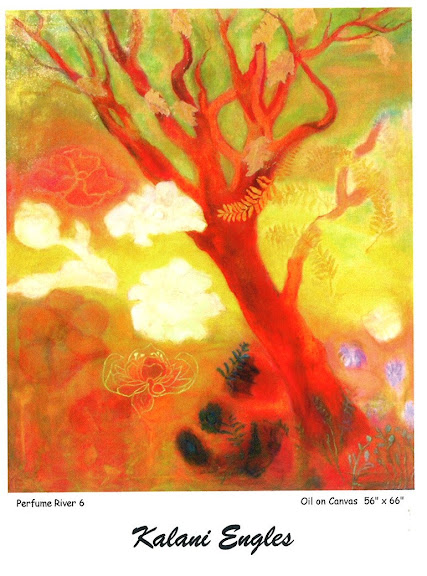 Kalani Engles shared her newest artist calling card with us...it's always so much fun for an artist to get new cards. And it's a great way to showcase your beautiful work. Perfume River 6 looks so lovely here.
Posted by Jamie Welsh Watson at 1:00 PM No comments: 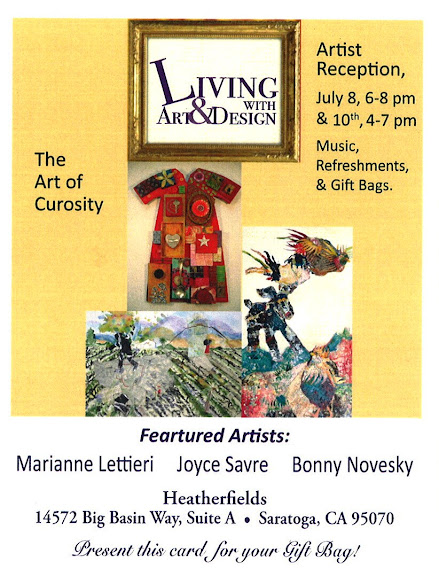 Bonny Novesky and Joyce Savre are currently showing their artwork at Heatherfields in Saratoga, CA - along with former Linden Street artist Marianne Lettieri! The opening last night was a huge success and fellow artist Kalani Engles was there to lend her support and enjoy the festivities.
Heatherfields is a special boutique with a focus on art, in the quaint village of Saratoga. Owner Patrice Davis is an interior designer and provided a lovely salon setting to showcase the works of these three artists.
Make sure you stop by for a visit, as the show will be up for another month!
Posted by Jamie Welsh Watson at 12:44 PM No comments:

Join us the second Saturday of every month, April through October, 2010.
Just hop on the trolley from downtown Redwood City. The fun starts at 7:00pm!
See you there...
Posted by Jamie Welsh Watson at 1:35 PM No comments: 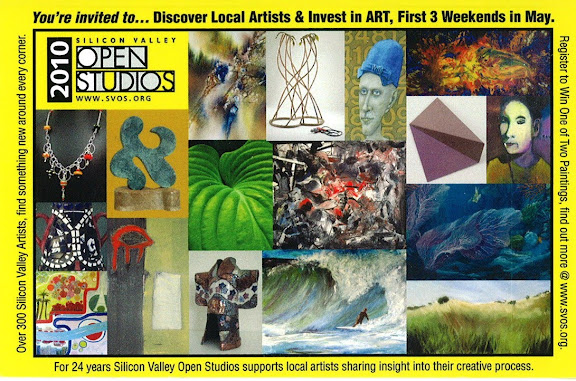 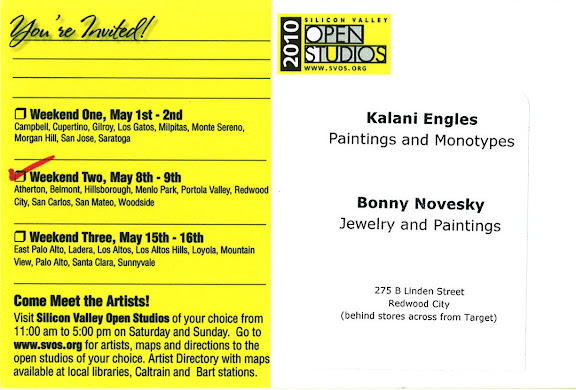 Please join us! We have 11 artists at 275B Linden Street in Redwood City for Silicon Valley Open Studios this Saturday and Sunday, May 8th-9th from 11:00am-5:00pm, with an extended evening opening on Saturday from 7:00-9:00pm, when a trolley will be running from our studio to galleries in Redwood City.

On display will be paintings, monotypes, collages, glass, sculpture, jewelry and fabric design.

275-B Linden Street, Redwood City, California. Across from the Target Shopping Center on El Camino Real.
Posted by Jamie Welsh Watson at 11:18 AM No comments: 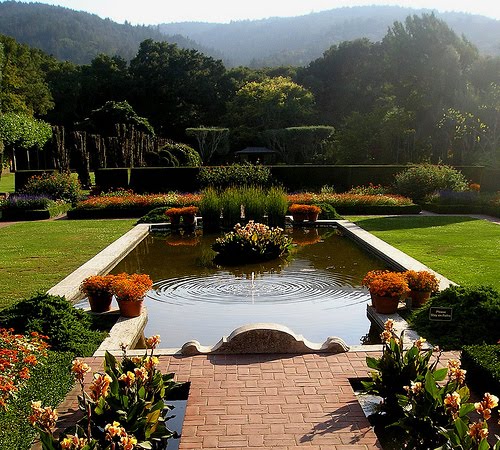 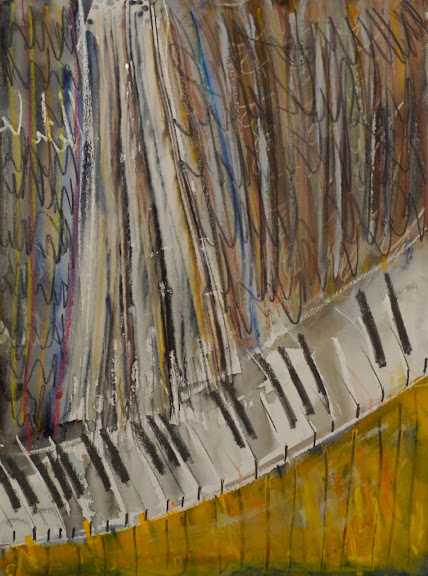 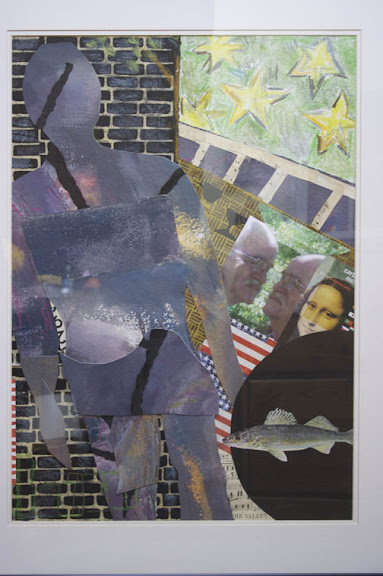 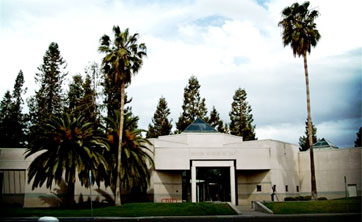 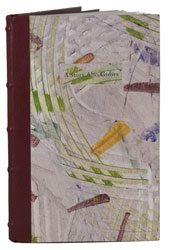 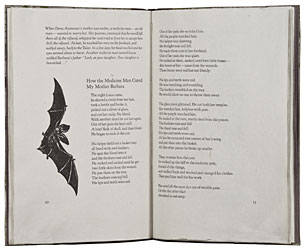 Last but definitely not least, Joyce has recently collaborated with the poet, Charlotte Muse. Joyce wrote music for one of Charlotte's poems entitled "Caldeando Song". The sheet music is in Charlotte's new book of poetry called A Story Also Grows, which was inspired by the words of Ascencion Solorsano, the last native speaker of the Amah Mutsun tribe of northern California. This lovely book is printed from hand set Kennerley Oldstyle type on the first cotton/linen handmade rag paper from the Chester Creek paper mill. The book is available for purchase here.
Posted by Jamie Welsh Watson at 5:53 PM No comments:

Letter to the Artists from Little House

Little House would like to send our sincere appreciation to Jeff Brown, Kalani Engles, Lisa Kindley, Marianne Lettieri, Barbara Mortkowitz, Bonny Novesky, Joyce Savre, and Lia Schnipper from Linden Street Warehouse for exhibiting their artwork in our gallery spaces during the month of March 2010.

The artwork was enjoyed and appreciated by many of our members and visitors.

"Peninsula Volunteers....Promoting Vitality for a lifetime."
www.peninsulavolunteers.org
Posted by Jamie Welsh Watson at 5:03 PM No comments: 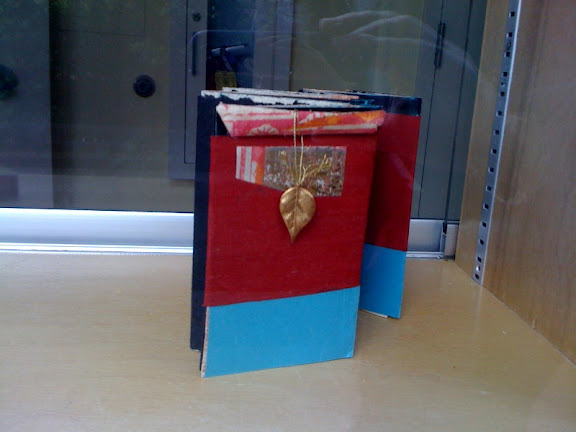 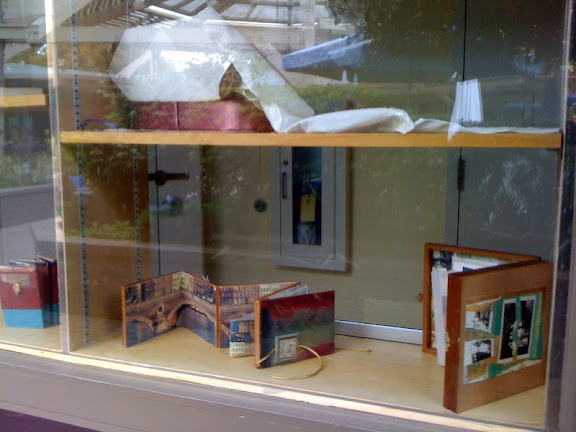 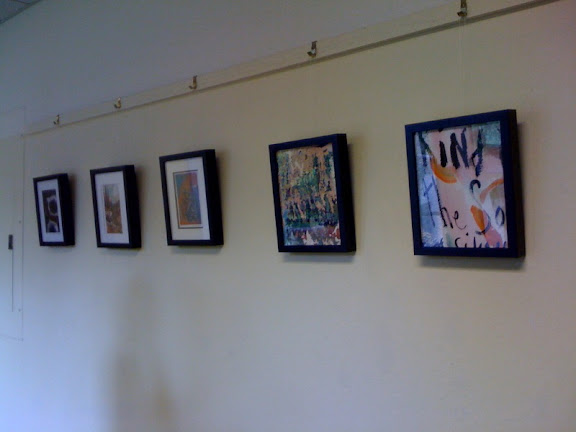 Eight Artists from the Linden Street Warehouse were featured in a group show at Little House, Menlo Park, California, during the month of March. These artists shared representative pieces of their work in this group show.

This exhibit showcases a variety of artist visions, styles, processes, and materials. Housed in a large space, are eleven individual art studios, each inhabited by an artist manifesting their own creativity. We present here the Paintings of Jeff Brown, the Monotype prints of Kalani Engles, a Painted Mural piece by Lisa Kindley, a Mixed Media sculpture by Marianne Lettieri. Book Arts by Barbara Mortkowitz, a Multi-layered Painting by Bonny Novesky, Collage Painting Compositions by Joyce Savre, and Encaustic and Collage pieces by Lia Schnipper. 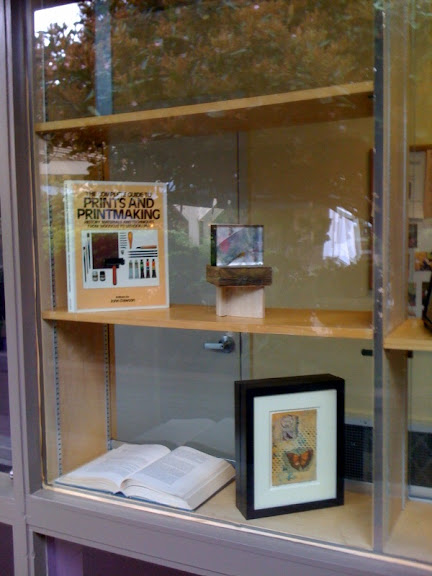 - Jeff Brown is a painter working with bold, colorful imagery.
- Kalani Engles makes Monotype Prints, and is a Painter.
- Lisa Kindley is a Muralist, and the owner of Butterfly Studios.
- Marianne Lettieri is a Mixed Media Artist. (And purveyer of fancy goods!)
- Barbara Mortkowitz is a maker of Art Books.
- Bonny Novesky creates amazing layered pieces inspired by her travels to far flung places.
- Joyce Savre Is a Collage Artist incorporating Drawing and Painting in her Artwork.
- Lia Schnipper works with Encaustic and does Collage Compositions.
Posted by Jamie Welsh Watson at 5:02 PM No comments: 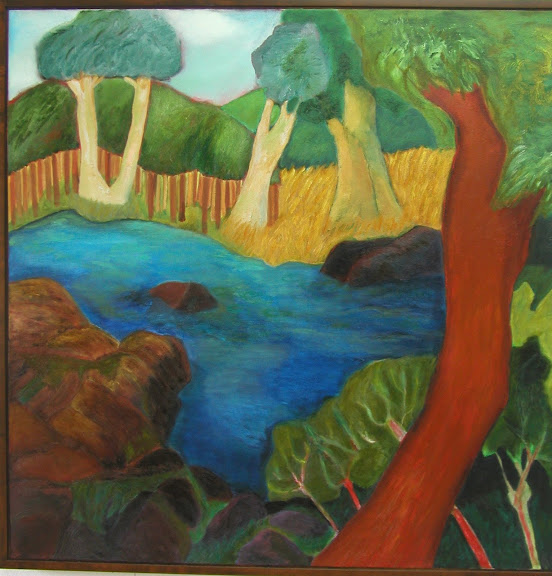 
A woman who has collected my art for years recently got divorced from her second husband. Among the sources of incompatibility in their marriage was the fact that he didn’t like my art (or any art for that matter). Whenever she hung a piece of mine, he would complain about it for a while and then take it down. His job, however, required him to be out of town for extended periods. Whenever he was gone, she would hang my art again in the same place it was before. When he returned, he would again take it down. This went on for a couple of years until this and other conflicts convinced her to leave him.
It was not an amicable parting, but they were able to agree on a property settlement – with one exception. He insisted on keeping a large oil painting of mine, Searsville, that she had acquired while they were married. He claimed it had been purchased with community funds, and that the room where it (occasionally) hung would not be the same without it. No amount of argument would change his mind, and she eventually relinquished the painting. Did he experience an epiphany and suddenly fall in love with my work, or was this just his final shot in the war of the walls? Take a look at Searsville (48” x 60”) and decide for yourself.
Posted by Jamie Welsh Watson at 10:44 AM 1 comment: 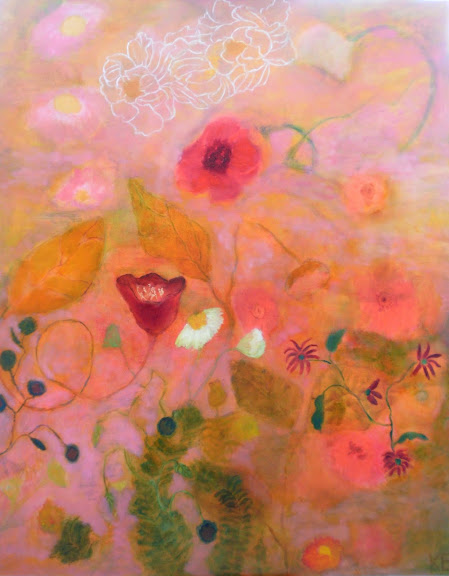 One of the biggest obstacles an artist faces in selling a painting is getting both partners in a marriage to agree to buy it. The husband loves it, but the wife thinks it’s too big, too bright, or too scary. For eight years a man in North Carolina who loves my work could not get his wife to put it in their house. Then one day her best friend from New York is visiting and says she knows about my work and loves it. Suddenly, the wife sees everything differently and now has two of my large paintings hanging in her living room (including Lockwood Folly 1). Did she really not like my work, was she trying to stand up to her husband, or did she just need reassurance that she was doing the right thing. Who knows?
Posted by Jamie Welsh Watson at 10:50 PM No comments: 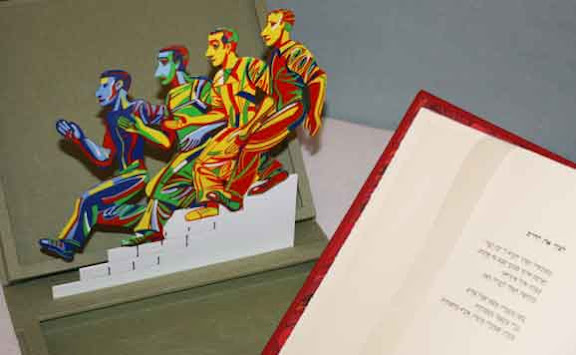 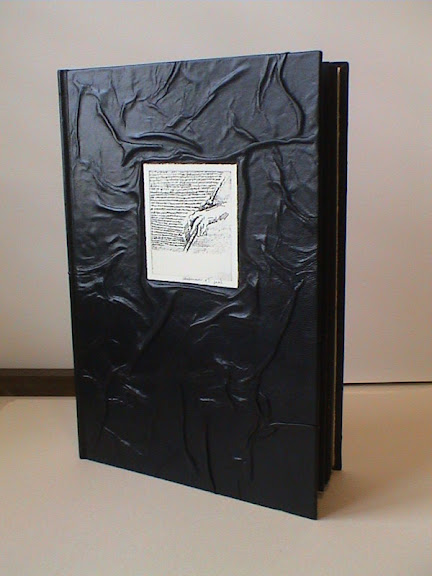 Ido Agassi and Even Hoshen Press of Ra'anana, Israel are currently exhibiting their fine art books in the display cases at GTU.

Ido Agassi is a master bookbinder, printer and publisher, who in an age of mass production, has returned bookmaking to a genuine craft and fine art form. His handcrafted, limited and numbered editions transform classic and Hebrew literature into works of art.
From their letterpress and intaglio publishing house in Ra'anana, Ido and his father Uzi Agassi craft their fine art books, which have been purchased by libraries, museums, galleries and private collectors throughout the world.

Barbara Mortkowitz, curator of the exhibition says, "It's quite an honor to be able to exhibit the work of Ido Agassi and Even Hoshen Press at the Graduate Theological Union." Mortkowitz who first met Agassi at the Codez International Book Fair in 2007, has curated several shows of their work, most recently at the Mechanics Library in San Francisco as well as the Jewish Community Library.