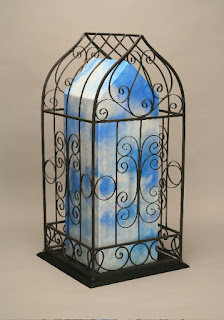 Marianne Lettieri has a solo show of new work at The Main Gallery in Redwood City, March 19 to April 20, 2008. The exhibit, called "Outside Inside," shakes up the concepts of freedom and confinement, suggesting that they might be the same. Cages, lanterns and paintings of sky are juxtaposed with familiar objects to create unsettling tension. The viewer will have to question what is outside and what is inside.

"For years I have collected a great inventory of interesting containers to use in my art," Marianne said. "The challenge for me with this series was to work with enclosures that have strong symbolic imagery, but say something unexpected."

The resulting exhibit offers thought provoking and ironic visual metaphor. For example, a red birdcage appears as if it would fly off into the blue canvas behind, if it were not tethered to a chain and barbell. A house shaped sculpture painted with clouds and encased in a wrought iron cloche gives new meaning to the phrase "castle in the sky." These and other pieces in "Outside Inside" reveal what is normally concealed by the placement of objects in such a way that poetic resonance happens.

There will be a reception for the artist on Sunday, March 30 from 4 to 7 p.m. The gallery is located at 1018 Main Street in the historic yellow Victorian cottage. The Main Gallery is open Wednesday through Friday from 11 to 4 and weekends from 10 to 3. For more information, please call the gallery at (650) 701-1018 or visit the gallery's web site at www.themaingallery.org.

Posted by Jamie Welsh Watson at 1:30 PM No comments:

Barbara Mortkowitz has curated a show which is currently at the Jewish Community Library in San Francisco.

EXHIBIT
Even Hoshen Press: Fine Books from
Exhibit: through March 16, 2008

Even Hoshen private press in Ra'anana, represents a collaboration of father and son Uzi and Ido Agassi. Named after the twelve precious stones of Aaron's breastplate, the press produces books in limited editions, accompanied by original etchings, prints, or woodcuts, with special hand made bindings. Book artist and designer Ido Agassi will be present at the opening reception on January 13, giving an artist's talk at 3 pm. This exhibit represents the first time the press's work is being displayed in the .

The Qi Project by Nanette Wylde

The Qi Project, an installation which investigates humanity, opens at The Krause Center for Innovation Art Gallery at Foothill College in Los Altos Hills, Tuesday, February 5th. The exhibition runs through February 29.

The Qi Project is an inquiry into the nature of humanity and what it means to be human at this moment in time. It is the gallery's first projected video installation. Project creator, Nanette Wylde interviewed people in front of a camcorder, via postcard, email, website and telephone. The questions asked were "What does it mean to be human?" and "What is humanity?"

The Qi Project was conceived in 2005 after nine weeks of study and travel in China. The project was conceptualized specifically for the KCI Gallery and its unique circular aspects.

The Qi Project brings together nine years of video people watching, interviews in both written and video form, and welcomes audience participation in the gallery. There is a companion website http://qiproject.net

Lynne Perrella has a new book called Art-Making, Collections & Obsessions. It features a page about Marianne Lettieri and her assemblage, "Pieces of String Too Small to Use, Valued." The book, which has been released this month online and to book stores nationwide, looks lusciously at the synchronicity between object and artist.
Posted by Jamie Welsh Watson at 6:23 PM No comments:

Hunger for Light, Fithian Press (2006). 30 large black and white botanical monotypes are paired with 30 original poems by poet Stephen Browning. “. . .defines the seriousness of her involvement not only with the medium but with her relationship to nature,” Nathan Oliveira 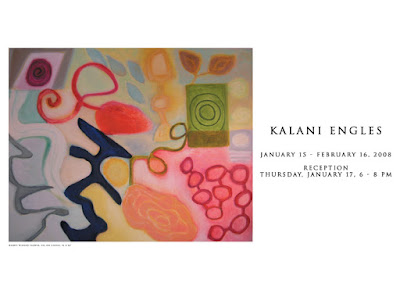 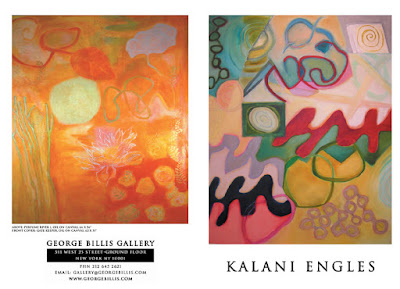 For our friends in New York, please stop by the George Billis Gallery in the Chelsea district. Kalani's work is showing until February 16th.
Posted by Jamie Welsh Watson at 5:53 PM No comments: