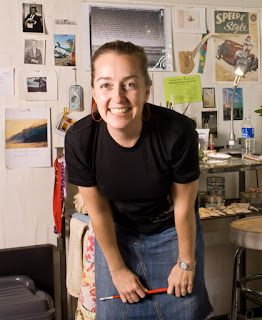 Jamie in her studio
photo by Jay Watson
Monotype artist Jamie Watson, sat down with photographer Jay Watson, to answer a few questions about her work and influences.

Where were you born and where did you grow up? I was born in San Jose, CA. My father was a pilot in the Navy, so I lived in about 8 different states for only a couple of years at a time, such as Washington state & Michigan. Then, my dad got a job with Delta and was based out of New Orleans, so the longest I lived in one place was in Louisiana, from 5th grade to high school graduation.

Even though you grew up in Louisiana, you seem to identify more as being a Californian. How does this connection to California influence your work? Well I think that it makes me feel rather carefree and open, with a lot of California colors. It has also influenced my passion for surfing and introduced surf themes in my prints. However I was on a trip to New Orleans the year before Katrina. And all of these senses awakened that I had forgotten about when I moved. Now I long to use deeper, more saturated colors, with heavier markings as a result of that trip. Although I haven’t done it yet, it is filed and available when I’m ready!

This could be a mash up answer of artists, film makers, writers, or musicians. Who are some artists that influence your work? That’s a fun question, which I have never thought about before. I feel influenced and inspired by the independent spirit and greatness of certain artists out there such as Bob Dylan, Neil Young, Ani DiFranco, Pete Seeger, The Mother Hips, Jack Johnson, Bob Welsh Jr.…some of these for not just what they put out, but the way they live. Frederic Remington, Flora Bowley, Kate Farrall, my husband Jay Watson, Wes Anderson, PT Anderson, Jared Hess, Daniel Day Lewis, Sofia Coppola, Bruce Brown…There are too many. I am also just as inspired by friends & family, surfers, bloggers and people like Coach John Wooden, Gabrielle Reece and Fred Rogers.

Fred Rogers, I wasn't expecting that. Well he was just such a kind soul who did so much good for children and television, and his ways of talking about issues and feelings on his show were very original and unique! Of the people that rotate through my brain a lot, he is often there. I found a special book written about him, and wrote about it in this entry.

Many people do not understand the monotype process. Can you briefly explain how your work is made through this process? Sure. I start out with oil-based inks and mix colors that I want to use for the day. I paint an image on plexiglass, typically using a brush and a brayer. I then place the glass face up on the bed of the press, lay the paper on top of the glass and roll it through the press. The intense pressure applies the image to the paper in reverse.

Collectors must really appreciate that each piece is a one of a kind original. How have you been making your art more accessible to new collectors and new art buyers? Yes, I think collectors do like that about monotypes. I get to hear a lot of feedback when I participate in Open Studios, so that is great. I have been making my art more accessible by writing a blog (though it’s not always about art), participating in Open Studios and having a website. My big goals for this year are working on getting my prints on Etsy and to have gallery shows in surf towns, with my surf themed work.

Ironically you have not put much of your work up on your blog, but you post frequently and you receive a good amount of traffic. Any plans you would like to share with us for your blog? I find that my blog is a creative endeavor, which is very fulfilling. I am rather surprised myself, that I have not included a lot of art in it. I am sure that will come with time. I like to write about a lot of miscellaneous things and give myself projects, such as my current one of photographing cars in my neighborhood. I also have a new feature called “Surf Fridays!” which you might be able to guess, will be something about surfing every Friday. My future plans are to include interviews of people, including artists.

It sounds as though you have been building a good network of artists through the blogosphere and the internet. Do you have any tips, experiences, or feedback you would like to share about this experience? I have met a few really cool artists via the blogosphere and that is a real treat. It’s almost like having a pen pal when you were a kid. It just keeps the inspiration going. I would recommend visiting blogs you like and leaving a comment here and there. It’s a very friendly and engaging atmosphere, I’ve come to find. Interestingly enough, it has sparked an interest in me to become a collector and I’ve been buying other artists’ work by finding them on the internet.

You’re also interested in street art. Have you planned any new guerilla tactics for your work? Will we see your monotype press next to a brick wall soon? Yes! The first one I did was in New York in November. My next plan is to leave artwork in San Francisco, sometime this Spring. I like to take a photo of where I’ve left it, and put it on my blog because I think it’s a fun thing to share. Each time I go on a trip, I will bring something to leave behind. Eventually I want to leave art all around the world. That would be nice.


Jamie will be participating in this year's Silicon Valley Open Studios, May 3-4. For more information, click here.
Posted by Jamie Welsh Watson at 6:30 PM

Yay for getting to know Jamie and her work a bit better! I like her even more now. And her mention of Fred Rogers is just brilliant. Thanks for the interview!

This is a fantastic way to get to know someone, especially one of your closest friends. Mr. & Mrs. Watson, this was a treat and a half. With a blackberry on top. And I don't even like sundaes (especially with cherries).

oooooh, how totally fun to log on and get to read an interview with jamie!! flattered that i get to be on your list of influencers:) you know you are on mine. i liked getting to know you better and learning a little more about your artistic process. i think a perfect way to kick-off the interview feature of your blog!

It's cool to get to know you all over again!
Charlotte